Jonteman93
May 2019 edited May 2019 in Contests and Challenges
Welcome to Terrina!

Now pick a side and let the fighting begin!!


What? You want information?. Sight. Ok then.
(For contest information, see the first comment) 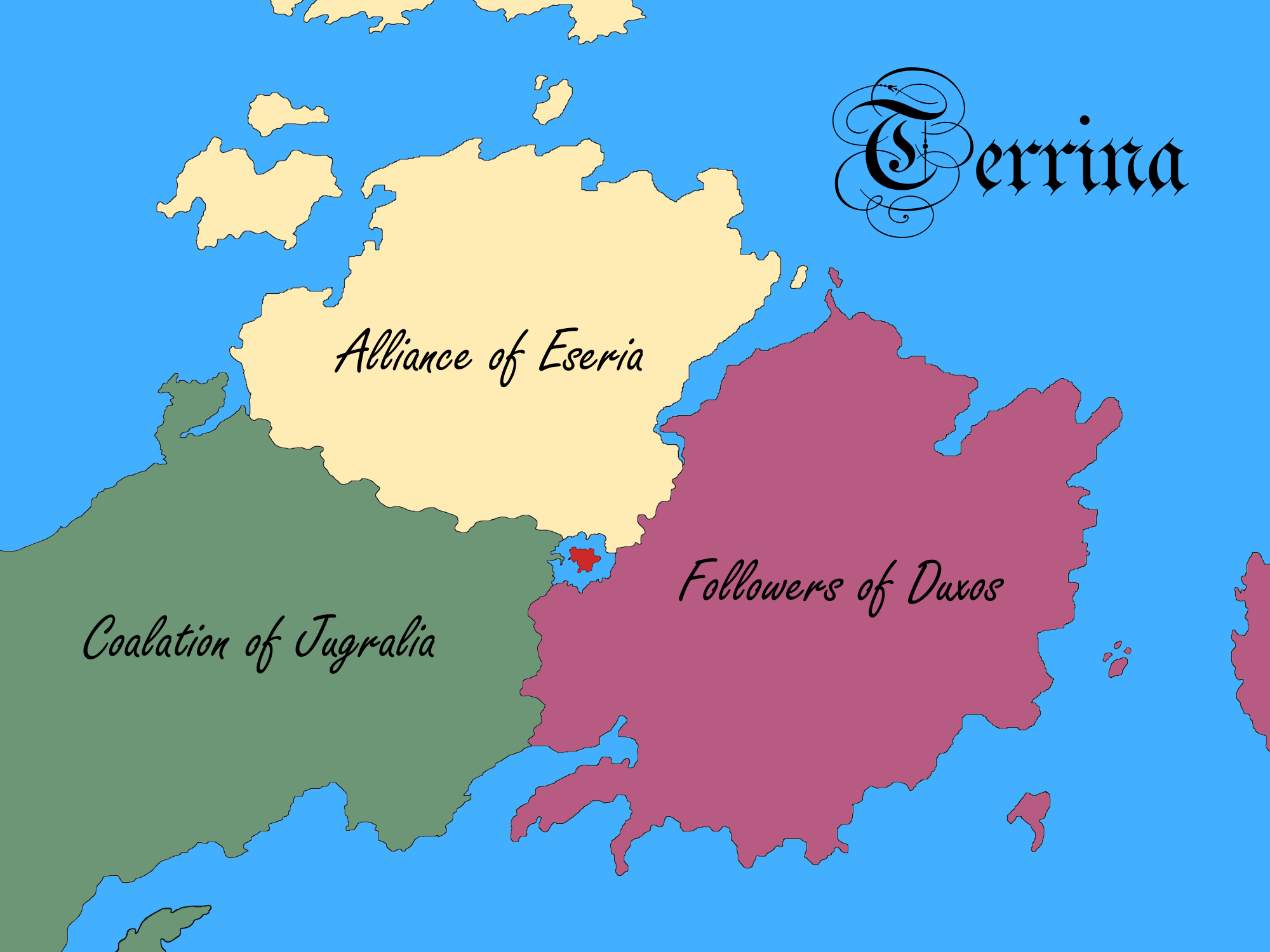 So what is this?
Terrina is a world/set/block or setting that I have planned to use for this and also future contests, challenges and sagas. (If the popularity supports it.) The world is more defined than Clancularius that is used in Planeswalker's Journey but much less than Avelaide that is used in Tournament of Champions.
This means that I have put out some corner stones. The rest is up to you.


Terrina is a peninsula in the center of the world Traquiell and makes up the battlefield between three Realms.
The alliance of Eseria, The followers of Duxos and the coalition of Jugralia have been raging war over the peninsula for a very long time. Even though the borders changes all the time due to victories, they never remain so for long before they are taken back. The peninsula is not everything the three powers are fighting over. In the middle of Terrina, there is an island, defended by a lake, host to a typhoon of tremendous power. The island of the name Ketralis, contains the ruins of an ancient civilization together with the secrets to their power. The three powers are seeking to take control over the island but to do so, they need to seize the typhoon, which can only be done with nine contraptions that are located around the lake. No realm have ever been in control of all nine at the same time so the storm have not been seized, yet.

The realms
The three realms, the "good" Eseria, the "bad" Duxos and the "ugly" Jugralia each consists of a large numbers of factions. Some major, some minor. How and why these cooperate are different both for each of the powers and each faction.
The one direct similarity between factions within each alliance/union is the "god" they worship. The Eserian factions worship the supreme archangel, the Duxos worship the prime arch demon and the Jugralian factions worship the arch dragon or behemoth dragon.

The alliance of Eseria
"Conquest and order"
The alliance of Eseria is located in the north of Terrina and are marked as yellow on the map.
The "good" guys. These are your typical knights in shining armor, cleric and divine angels.
Esaria has the best armies and rule with security and order. (For the most part.)

Major factions:
Kingdom of Eseria - The center of the alliance and the seat of the supreme archangel. Eseria, even before alliance was formed, was a very diplomatically powerful faction that almost every other Eserian faction was either directly or indirectly allied with.
Vilesia - One of the stronghold factions of the angels.
Hallahem - A dwarven faction that once were an allied to the Jugralia.
Cartas - An economical powerhouse that houses both humans and high elves.
etc.

Important people:
The Supreme archangel - Greatest of the angels and god of the Eserian people. Her spells can save entire kingdoms and armies from destruction.
Mikahelus - High priest and speaker of the archangel.
Julianne - Powerful angel
Horash - Knight and slayer of undead and demons.


The followers of Duxos
"Corruption and control"
The The followers of Duxos is located in the east of Terrina and are marked as purple on the map.
The "bad" guys. These are your typical dread knights, necromancers and demonic demons.
Duxos has the most powerful magic and rule with fear and power. (For the most part)

Major factions:
Ergoth - The faction that holds the blood altar of the arch demon.
Dorous - A human faction that most of the necromancers come from.
Kingdom of Skafhan - One of the larger factions of the vampire race.
The land of the Blight sun - The major faction of the dark elves.
etc.

Important people:
The prime arch demon - The oldest of the demons and god of the Duxos followers. He is a mighty spellcaster that can ruin entire cities in seconds.
Duxos - An undead dread knight, famous for unifying the worshipers of the arch demon under one realm.
Mathixus - Powerful necromancer and summoner of demons.


The coalition of Jugralia
"Destruction and growth"
The The coalition of Jugralia is located in the west of Terrina and are marked as green on the map.
The "ugly/wild" guys. These are your typical barbarians, shamans and ferocious beasts.
Jugralia has the largest beasts and strongest warriors where the mighty rule over the weak.

Major factions:
Tashanha - A vast forest that hosts most of the races of Jugralia.
Jugralia's chosen - A company of beast callers, dragon riders, warriors and druids.
Elves of Jugralia - An elven faction of the Jugralian land.
etc.

Important people:
The arch dragon, behemoth dragon or behemoth arch dragon - The Jugralian god. She might not be able to cast spells like the other two but she is by far the largest and physically strongest of them.
Harvan - Tamer of great beasts
Frihalda - Powerful earth druid
The earth shaker - Huge beast

Terrina set symbol. I made these for those that can and want to use them. They are however completely optional.
If you want to, feel free to come with your own ideas for improved, future or additional set symbols that can be used for Terrina.