Tommia
August 2019 edited September 2019 in Sagas
13. An unlucky number, according to universally accepted superstition. Millions of Stitia’s residents are haunted by this number, not because it’s unlucky, but because this is the number of times many of their mortal souls are grinded through the Cursed Rebirth. Anyone who dies a sinful or supernatural death is cursed... cursed to be reborn as a lower being, cursed to live a life more torturous than the last, and in the end, they are cursed to meet a more tragic and agonizing demise...

The very few who know about the Cursed Rebirth seek to avoid it at all costs, and to uncover its mysteries. These are called the Triskaidians. These greater beings have a natural resistance to the Cursed Rebirth, in their faith in the gods or their pacts with demons, with the knowledge to escape death or the ability to resist it. However, the luck of Stitia is not in their favor. The Triskaidians are born with a curse as well; the supernatural has a knack for ending their lives as soon as possible. Sin will run to them, tainting their lives and destroying their faith. Those that do not die outright go insane, eventually succumbing to the Cursed Rebirth anyways through self-infliction.

You are a Triskaidian. After a recent sweep of supernatural deaths amongst the people, be it friends, family, or strangers, you decide that you should finally start to investigate. Someone must be behind all of this. Rumors say that this is the only plane this happens on, after all.

- Create a Legendary Creature card to represent your character. They must have some kind of natural immunity to the supernatural, expressed through the card in some way or another. (Please read below what races you can use, and what colors you can use with them. Note that these are just suggestions, and if you can make it work, you can go for something crazy like a red and black Merfolk in Nasita.)
- Create an artifact that’s a Lucky Charm for your character.
- Create a card that displays a supernatural event the character holds dearly, whether it was a miracle that inspired hope, or a tragedy that inspired them to act.
- Make a minor story blurb about you character. It definitely doesn’t need to be an essay on their life story, but a good backstory will make it easier for me to understand your character, enhancing the experience.
- Use the map and info below it to determine your hometown. 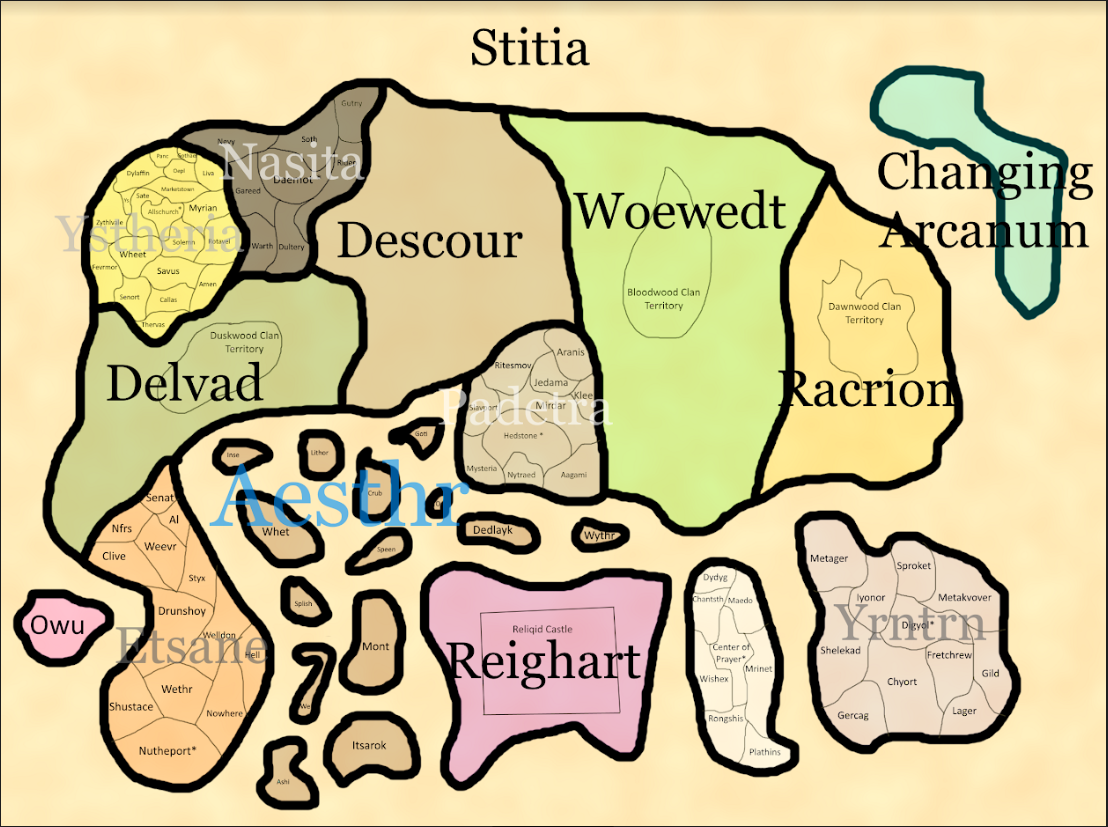 The 13 Sectors (From Left to Right):
- Ystheria (Humans, Dwarves, Elves, Constructs, Leonin, Merfolk, Angel): Home of the main civilian populace, and the unofficial capital of Stitia. This is normally the third most peaceful sector on the plane, but it’s recently become victim of mysterious mass serial killings by an entity known only as “The Horn”.
- Descour (Elementals, Humans, Dwarves, Leonin): This vast desert offers little more than a barren place of rocks and sand. Desecrated over a thousand years ago, only the brave go here, and very few survive.
- Nasita (Demons, Devils, Zombies, some Humans and Dwarves): This corrupted sector sits upon the highest peak of the mountainous wasteland. The strongest forces of evil embrace the cruelness of the world, abusing the supernatural.
- Woewedt (Elves, Leonin, Humans): This temperate jungle is home to a majority of the Elf and Leonin populations on Stitia. While the nature is tame here, keep in mind that you’re always being watched by one of the Elf tribes.
- The Changing Arcanium (All races): In this melting pot, all races coexist as one, but this city is not supposed to be. Appearing somewhere in Woewest, this city seems to fade in and out of existence. While many things change each time, one thing stands out; Stitians have discovered The Great Listorium and the Great Stagazium, books containing all of the plane’s history and all of its futures.
- Racrion (Leonin, Humans, Dwarves, Elves):The plains of Racrion are home to nature’s proving ground, a prime example of the cutthroat world Stitians live in. Not that many people live here, but the main sentient inhabitants are Leonin and Humans.
- Hitcherald (All Races Except Demons, Devils, Constructs and Zombies): The holy land of Hitcherald is about the only holy place in all of Stitia. Within are the faithful, those who worship the Omnipotent Six. The people here are quite peaceful, but heretics threaten the church,
- Delvad (Werewolves, Elves, Elementals, Humans, Dwarves, Merfolk): Nature warps within the trees, creating horrors beyond imagination. Twisted werewolves, evil elves, and elementals of pure corrupted energy torment the land.
- Etsane (Humans, Dwarves, Constructs): This city of law has been overthrown by criminals. While diplomats struggle to make laws, Thugs and Gangs rules the streets and bribe government officials.
- Aesthr (Merfolk, Humans, Dwarves): This massive ocean has a few islands, home mainly to Merfolk, but some humans and dwarves live among them. However, recent supernatural activity has caused intense storms at sea.
- Leighart (Vampires): The Kingdom of Leighart, home only to Vampires, is the throne of the Reliq bloodline. Staying fairly secluded, they grow very suspicious of any vampire that develops a relationship with others.
- Padetra (Zombies, Spirits, Demons/Devils, Humans, Dwarves): Serving as the main central area for the dead and dying, this Sector has practically become a civilization all its own, where liches, necromancers and demons rule over zombies and spirits.
- Yrntrn (Dwarves, Constructs, Humans): Probably the only advanced sector in the entirety of Stitia, Yrntrn is home to the industrial Sector, where research is done to better humanity’s odds against the supernatural.

New District - Owu (Humans, Faeries, Angels): The smallest region in Stitia is also its most beautiful. Secluded, and recently surfaced, not much is known about it, except that it has not a single corrupted being in it... yet.


The last day to join the adventure is September 13th.

Update: After the 13th, anyone that hasn't already claimed a spot and wants to enter... still can. That's right. Until we reach the climax, people can enter after the 13th (or even before!) by hijacking an NPC, or... create an original villain. Whether you're a Triskaidian, a sheer sower of chaos, or a planeswalker, you'll be able to join in as a villain, with the main purpose of stopping others. Whether you stop them from finding the truth, stop them from defeating the big bad, or... just stop them from living.
«1234567…52»