Intrigue in the Marble Council

HeroKP
May 2020 in Sagas
As some of you know, I have recently launched the sixth installment of my main contribution to this site, COLONISERS. But recently, I have found I want to branch out and try new things. So here is a saga trying to explore the never-before-explored, which I hope will not crash and burn. 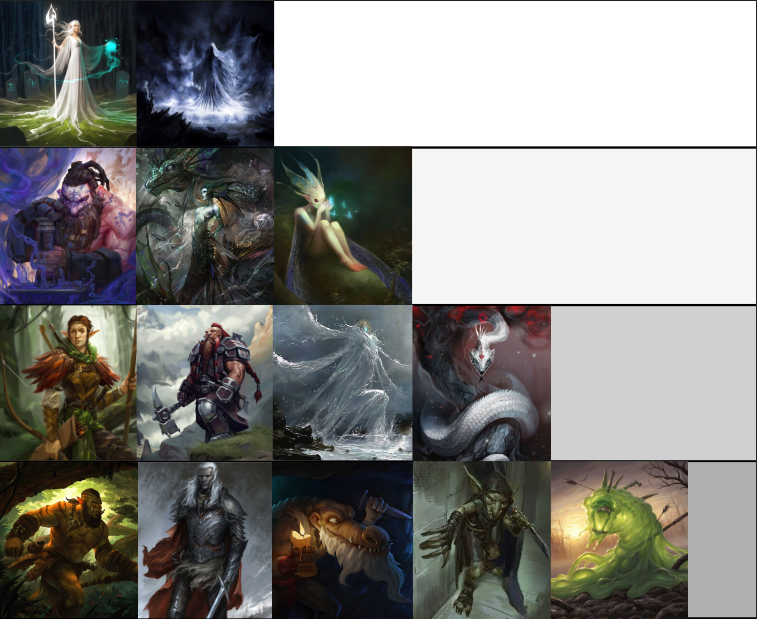 Once upon a timey time, there assembled a collection of peoples, of different races, of different planes, but all of the same two contradicting desires. Stability and POWER. That group has since been altered many times, as planeswalker wars ravaged the universe, but those two ideals still hold. The council's existence is extremely beneficial to most everyone in the multiverse, firstly because of the prosperity and trade that it brings, and secondly because the members are all constantly plotting against each other rather than trying to take over the world.
There are 14 as of this moment, but many more shall soon join.


'But Hiro, who could spearhead these new factions?'


YOU. Congratulations! You are the leader of a newly accepted faction that just joined the ranks of this Interplanar Parliament, and you are just as ambitious and power-hungry as these chumps!


'That's all fine and good, but why is the parliament diagram a Tier List?'

See, that's another thing. Not every marble councillor race is equal. The Iron Councillors, making up the largest subdivision, are the relatively new members. This is where your factions will start out. In Major decisions, they each get....

Above, the Bronze Councillors, who have been in the council for sufficiently long to deserve the status. They each get....

The Silver Councillors, denoted by charitable actions towards the others, get....

And finally, the Golden Councillors. At the moment, there are only two. They are the factions that really call the shots, and they each get....


Soon, descriptions will come for all of the factions already present in the council and their quirks, but for now, what you must do, is.....

Make anywhere from 1 to 6 cards describing a new player in the multiverse's political game. You must outline what they will bring to the council (resources, information, ....services?), and if they request anything in return. We will start with however many players we have then, but unlike in COLONISERS, new ones can JOIN AT ANY TIME!

Then, every week or so, something will stir inside the machinery of the council, and a new decision will be put to vote by one of the AI councillors. Players can put decisions forth at ANY TIME! You can do anything at ANY TIME! Every vote or political action should be ideally accompanied by a card. Then, I shall set up a RNG table for different outcomes that could happen (as fairly as I can), and I will roll the dice.

EVERY DECISION AFFECTS EVERYONE.

The ultimate goal of each player is to become the chairman of the council, but again, open world, do what you want.