MTG_Sappy
July 20 edited July 20 in Contests and Challenges
Hello all, MTG_Sappy here, and its nice to meet you,


First of all, I want to say a thank you to @Arceus8523, who when I was about to give up on this set and make a Conspiracy set, told me to do this.

This is the planesculptors page. It has a list of all the current cards in the set and might be outdated from time to time.
http://www.planesculptors.net/set/edremon-welcome-to-battlepunk#cards


Following what @ningyounk did, I have made a Set skeleton and am doing a 249 card set. I started with making the archetypes and making a signpost uncommon for each one. Think of

For the BlueBlack reanimator Archetype in M21. It gives the meaning of the archetype, and cleanly explains what it is.

I will go and list what these archetypes are along with their signpost uncommon before moving on to lore, etc.

For the BlueWhite archetype, we have Toughness, with their own mechanic, Bulwark. Basically,

"If creatures your team controls have total toughness N or greater, EFFECT"

An example of this can be seen in the signpost itself

(Many of these do not have art as I am currently making cards themselves, art will be found at a later stage.)

For the RedGreen archetype, it is pure aggro. Someone told me that sets sometimes need generic archetypes so I can focus more on some of the other ones. 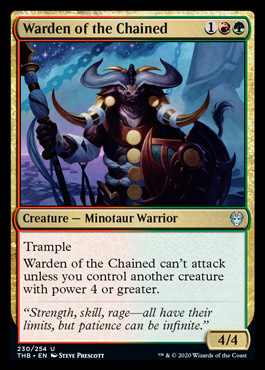 A very basic, generic card, in comparison to the RedBlack one, Slaughter Priest of Mogic, which was very Sacrifice Centric

SImilarly BlueBlack, is Tempo. Though it can have many meanings, here it means that it plays efficient threats and deals with the opponents board.

In itself, its a 2 mana 1/2 with Evasion, that can get you to other cheap threats or removal. Many other decks might want to splash colors to run this card, which is one of the reasons this archetype is generic and not very specific.

This one, however, is more specific. Leading us onto another Mechanic, Crew, or in this case team crew. Red White is vehicles (again). An example of team crew can be found in the cycle of Vehicle gods.

The Signpost uncommon is a cheap, efficient threat in

Team Pilot
On itself, it's a 2/2 with first strike and lifelink, though it can give your Teammates beastly monsters those keywords or help activate a Vehicle.

For simic, I decided to do Draw 2 tribal. Think of the Izzet in Eldraine.

A very simple theme, though an effective and narrow one.

RedBlack is also aggro, though its more of a Sacrifice themed aggro, rather than straight smash face aggro. For the signpost we have


Now we move onto another new mechanic
Symmetry

Symmetry [Cost] (If you cast this spell for its symmetry cost, another target player creates a token that's a copy of it as it enters the battlefield.)

An example is the signpost uncommon itself. 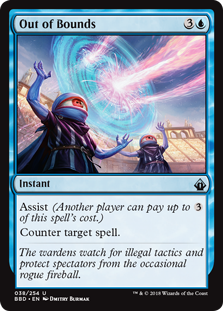 However, before I move unto the remaining Archetypes, White Black, Blue Red and Black Green, I must mention one more mechanic.

Overheat
Overheat N (Whenever you cast a spell, put an overheat counter this artifact. When the Nth is placed sacrifice it.) 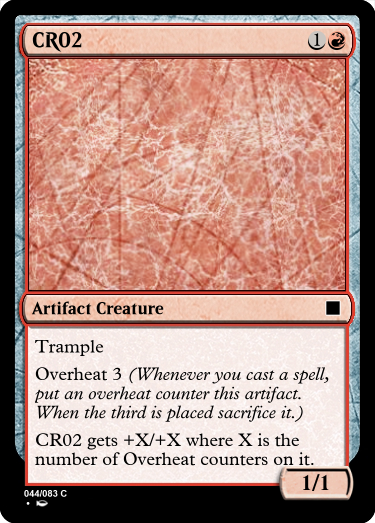 And one more thing, a new artifact token (mechanic?)

Polluting means making Smog tokens
which have, well you can read it above or I can just show you a Smog token. 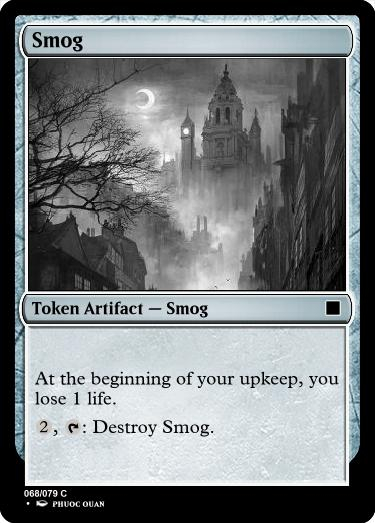 I like this since it fits with the Steampunk theme, however that is neither here nor there.

ok, so for the last 3
WB is Nobel tribal (think of the Eldraine people)
UR is Artificer tribal/Artifacts
BG is tokens.

As a rundown for the other ones,

Wooh, that was a lot to get through, I know what you're thinking; How can I help?

How can you help?

Well, there multiple ways, you can give me card ideas, with reasons, or extra lore ideas. I'll make a separate post later regarding the lore on this set.