ningyounk
April 22 edited May 3 in Contests and Challenges
Hello everyone!

I have a quick challenge for you this week that is going to test your flavour design skills. MTG is full of cards that reference real people and fictional characters from the real world, for instance Hapatra is Cleopatra, Kenrith is King Arthur, etc. As you guessed, the goal of this challenge is going to take more existing characters and turn them into MTG cards. What makes them unique and recognisable? Turn that into MTG terms!


Here are the detailed rules:

Here's an example I made that would be considered a valid entry: 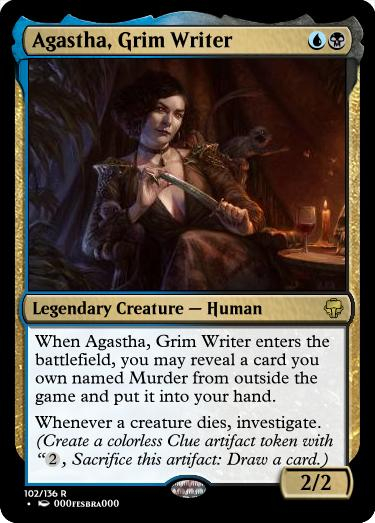 (Did you recognise her? She's based on Agatha Christie, the famous writer of mystery murder stories.)

As usual, I will give some short feedback to everyone who participates. The rewards will be distributed as follow:

I hope this inspires you to make some great top-down designs! Good luck everyone