HYBRIDS! And Not The Simic Kind! (Sponsored by Murkletins) 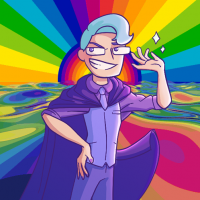 Ranshi
September 2020 in Contests and Challenges
Hybrid mana was first introduced in the set Ravnica: City of Guilds, and has since become one of the most popular mechanics in MTG. It has since appeared across a variety of sets and a variety of planes, earning it a status as a deciduous mechanic, a mechanic that can appear in a set when it fits mechanically or flavorfully within the set without being counted directly as a “set mechanic.” For example, it has most recently appeared in Ikoria: Lair of the Behemoths, where it helped give certain cards additional flexibility as to which decks they could be played in. Despite its popularity, though, designing hybrid cards can be one of the more challenging cardsmithing tasks due to the very strict (and oftentimes quite contentious) set of requirements that determine whether or not a hybrid card is a color pie break, and even the official Magic: The Gathering R&D breaks their own “hybrid philosophy” from time to time due to how difficult it can be to fulfill while remaining innovative (granted it will often be done in the interest of exploring space a certain color doesn’t typically get access to). That being said, these same design difficulties extend to our cardsmithing community. Oftentimes, hybrid cards will be designed in such a way that very obviously breaks the color pie, because in our gut most of us are using our understanding of gold cards to design them. Why have we yet to properly define what “hybrid philosophy” is? Well, that’s because it’s part of our challenge for you. Your task is to cards that use hybrid mana as the only colored mana in the casting cost. I will be co-judging this contest with @Arceus8523.

Firstly, let’s start with the rules:
Arceus and I will be judging the contest using the following general criteria, in order of most important to least important (points 4 and 5 are about equal):
1. Does this card work as a hybrid mana card in its color pairing?
2. How creative is this card? Does it push hybrid mana design space for its color pairing without becoming unreasonable or a break? If it does become unreasonable or a break, how clear is it that the designer was trying to take a calculated risk with their designs?
3. How well thought out is this card? How “clean” is the design? Is it balanced for the format it is intended to be played in? Do the abilities all have a clear reason to be on the card, whether mechanically or flavorfully?
4. How “clean” is the card from a syntax and appearance standpoint? Can we clearly understand what the card does? Does it largely follow proper MTG language and syntax? Is there any text running off the text box? Is the art of quality generally comparable to official MTG art? Is the art unique, and not a piece of art already used on an official MTG card? Is the artist credited? Minor wording errors likely won’t cause anybody’s entry to drop in the standings, but show that you took some time making sure your card looks clean, reads well, and has the proper artist credit.
5. How strong is the flavor/lore of the card? Is there any clear/strong flavor or lore at all? This doesn’t have to be specifically flavor text, but can also involve name, art, mechanics, etc.

Prizes:
(As it stands, the prizes are undetermined but are going to be of some value and sponsored by everyone's favorite fox, @murkletins!)

The contest will close for judging on 9/24/20 at 11:59 EST. Arceus and I highly recommend you do some research on "What makes a hybrid card a hybrid card?" and "What can cause a hybrid card to break the color pie?" This really is a tricky area of design, so it behooves you to prepare as opposed to just diving right in. Good luck everyone!
«12»