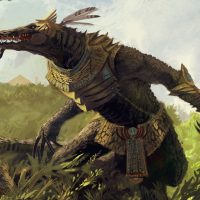 TheDukeOfPork
February 2021 edited March 2021 in Custom Card Discussion
Hello everyone! I've decided to commit myself to a project that will last who-knows-how-long, and this is the discussion where I post all my cards, and everyone can post their ideas and help! 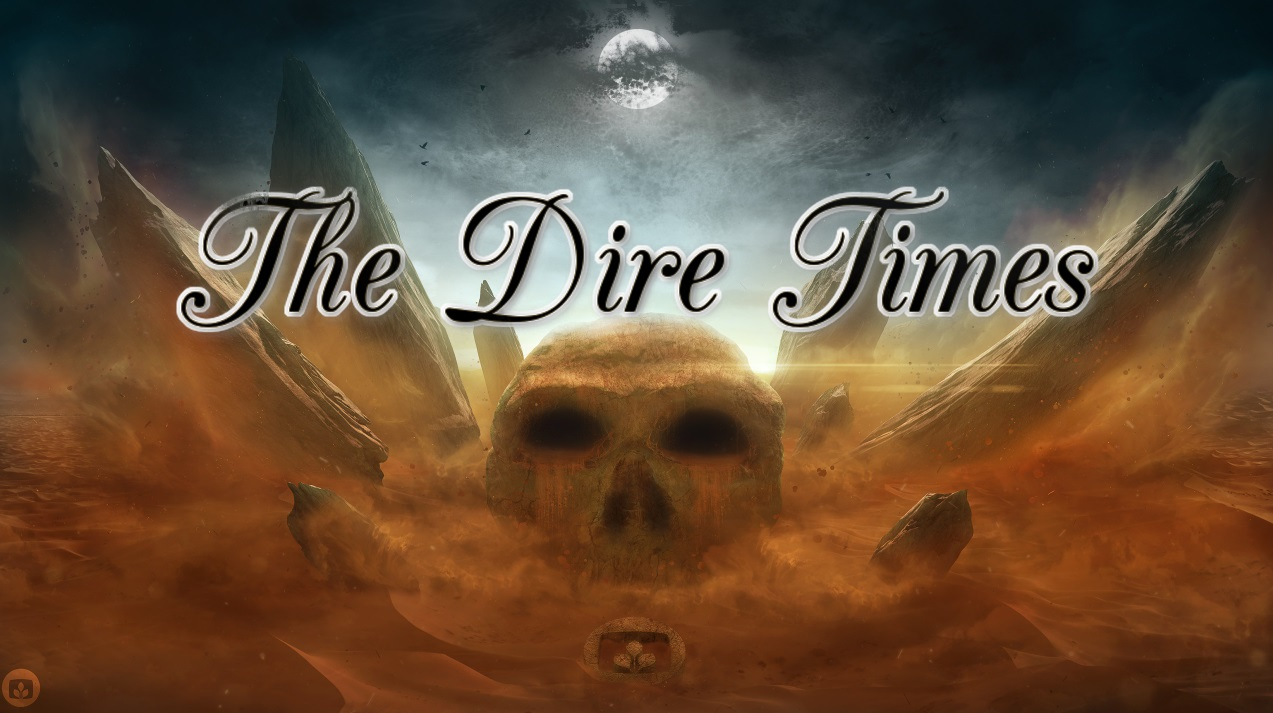 [Such thanks to @Tomigon for this image editing!]

Vaevictis Asmadi has used his final breath to turn the world into a barren desert. Talk about going out in a blaze of glory, eh? Anyway, these are the points of the projects-

And now we've gotten through the points of this, let's get into the project itself! Goodbye!

Khan tokens are a new mechanic being introduced into DIRE TIMES. They resemble strength in numbers and the rebellion the Khans incited against the elder dragons. For example- 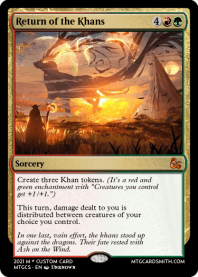 Return of the Khans creates THREE Khan tokens, thus creatures you control get +3/+3 UNTIL someone destroys one, two or all of the khan tokens. Note that the Khan tokens are green AND red.

Fantasize is a mechanic that resembles Arcades Sabboth, the wisest of the elder dragons. It resembles looking into the future and seeing what it beholds OR it can resembles using imagination. For example- 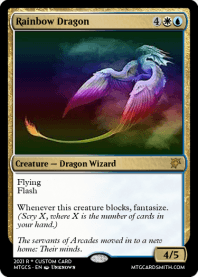 Rainbow Dragon has Flying and Flash. But that's not all. It also has the mechanic "Fantasize": (Scry X, where X is the number of cards in your hand.) Whenever it blocks. Note that this breaks the colour pie if it's in black or red.

This mechanic resembles Nicol Bolas (I'm doing a mechanic for each elder dragon), the most selfish and greedy of the elder dragons. It resembles taking over land and ruling the citizens. For example- 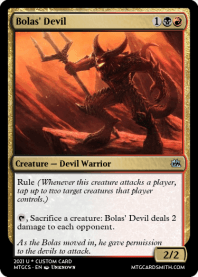 Bolas's Devil has rule. (Whenever this creature attacks a player, tap up to two target creatures that player controls.) It also has another ability, but that's not relevant right now. Note that this breaks the colour pie in green and white.

This mechanic resembles Palladia-Mors, the most psychotic and chaos-loving of the elder dragons. It resembles mindless destruction. Creatures can "Madden" other creatures. Note that when they are "Maddened" they become "Mad". For example- 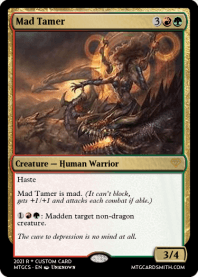 This mechanic resembles Chromium, the smartest and sneakiest of the elder dragons (As she can turn into humans, so...). It resembles being so sneaky that no one notices your their. For example- 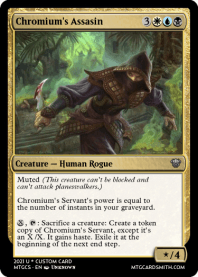 Chromium's Assasin is probably the most interesting of the cards I've made for this so far. It has muted, sure, but it's other abilities are interesting (and worth observing). It creates token copies of itself, which...is interesting as well. AND it toys around with instants. Ah yes, the keyword, reminder text: (This creature can't be blocked and can't attack planeswalkers.)

This mechanic resembles Vaevictis Asmadi, the most skilled of the elder dargons. It resembles chaotic (yet smart) battles and destruction. For example- 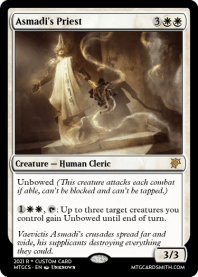 **Edits made to mechanics**