CrafterofTruths
June 2019 edited June 2019 in Just for Fun Contests
When I was creating a card for a competition, I realized that you can create custom cards. While there are artifacts and creatures and artifact creatures, there is also a bar that is on the very top that says "Custom". This little option allows you to fuse old things to make new ones like creatures sorceries, and artifact enchantments, but as well new card types like traps, manifests, and more. There is a lot of room for creativity.

While this is just an idea to spark your imagination, you can post your cards here! Depending on how many cards come, I can give prizes for the best ideas! Just remember to post the rules of your new card type either on or next to your card. If you are stumped, here is a new type to help you out!

Creature Sorcery:
(When creature sorceries are played, you can choose for it to stay as a creature or to resolve as a sorcery.) 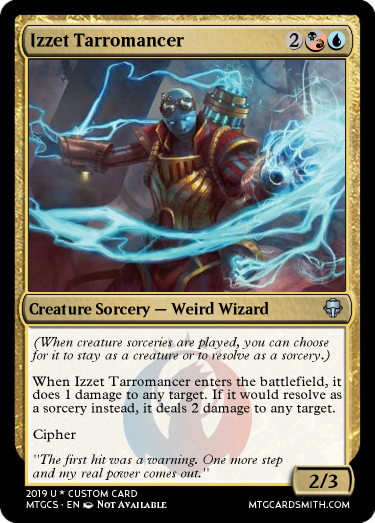 I can't wait to see some great ideas! Happy Smithing!
«12»