CassZero
November 2020 edited November 2020 in Sagas
Knights from all kingdoms and students from the Haruvan Knight School;

Choose a hero with the type of "Knight" between 16 to 24 years who will enter the tournament where they will fight to eliminate the other competitors until only one is left standing, like the true elite champion of the knights.
The initial fights will be in groups, until we keep two teams that will do the individual fights. May the best win in the end.

The winner will be instantly promoted to the support knight of an Elite Captain, who will mentor you during the tournament.

Scale of patents (everyone has two support knights - right hand and left hand. These knights can also resign and seek their promotion in the cavalry.)
Based on the character of Tournament of Champions 3 - Aeryn
The tournament will be based 22 years after the events with Aeryn.
https://forums.mtgcardsmith.com/discussion/5385/aeryn-tournament-of-champions-3-saga-category#latest

Instructions:
- This is a contest of both card creation and a role-playing game. You will both make cards and write/play the role of the characters you make.
- Each cardsmith creates one legendary creature with converted mana cost 3 or less that will represent them as knight in the tournament.
- Each cardsmith creates a character with personality and background for the chosen knight.
- Each cardsmith may also create one signature card or a companion card with converted mana cost of 3 or less. (So the same mana limit as the hero card)
- After each victorious match, the cardsmith can choose to improve their hero by making a new stronger card for them with new artwork.
- Or the cardsmith can, if above is proven difficult, choose to add either an additional signature card or a companion card to emphasize growth.
- Cards must at best ability be made balanced. This is also true for the story of the characters.
- Cards can be changed or replaced before the deadline for the active stage.

Signature and companion cards:
- Signature cards are cards that represents the knights' abilities, spells, equipment or other utilities which they can use. This can also be memories, experiences and knowledge which the hero have achieved.
They are sorcery, instants, artifacts and enchantments.

- The signature card and the companion card are limited to the same converted mana cost as the hero but they can be changed whenever you want while the hero card can only be changed if you choose that option.
(The option of not making a new card for the hero is just so that you are not limited by too little available artwork)

Time:
I will leave it open until we reach 16 participants, but if I have more in a short period of time, I will make a cut-off date.

Post- First stage:
The winners will be given a minimum of one week to upgrade their knight and/or make or change their signature/companion cards. Extra time may be given if the need is justified. This will continue in a similar pattern until the last 2 kinghts remain. Some special rules will occur then but more about that then.

First stage: 3
Second stage: 5
Third stage: 7 (An additional signature/companion card will be allowed)
In the team period, the winners will add a signature card 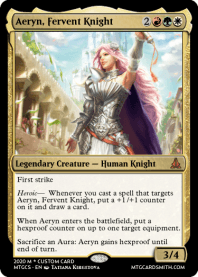 (It will be totally based on the way the Tournament of Champions by Jonteman93 was conducted - a tribute for the great work done by him.)