mmm3creator
April 2021 in Contests and Challenges
The Infinite Consortium!

Such a grand name for an organization which we know almost nothing about and that has been roundly ignored for years. As far as I know, the only canon modern day intra-planar organization other than the Gatewatch.

With several planewalkers who likely knew how to contact more than one cell, the odds that one or more organizations continuing to claim the name live on. Even if they do not, as a cellular organization, the part on each plane should have continued onward.

Lets get together and fix that. As an example. I've taken a stab at the most prominent member we know of, the one with some fan art. I have cards representing Baltrice on Esper while the Consortium was a going thing, and on Kamigowa immediately after the War of the Spark. 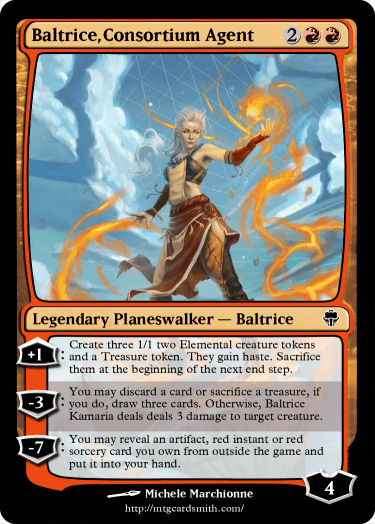 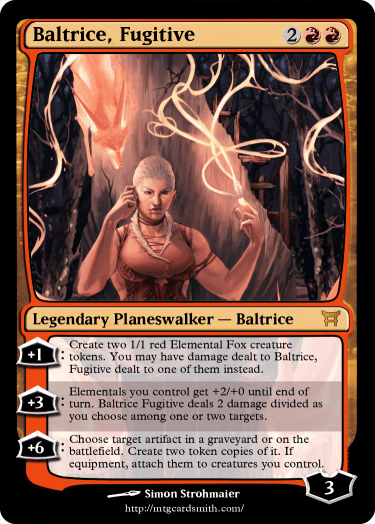 So, setting the challenge: Two card minimum entry. The idea is to make things that are tied things together.

The first card must be either a Planeswalker or a Legendary Creature in charge of a Cell of the Infinite Consortium on a plane. Please specify if it is back in the day of the original organization or current.

The second card must be a "Signature Spell". Card type does not matter. For this group, even more exotic types such as a Conspiracy, Plane, or Sheme are perfectly appropriate. You can make a second version of the same character, in which case the first card should be when the Consortium is being run and the second after.

You should specify the plane in each case, the planes may be different.

I will be judging. I'll be looking for cards of a total quality such that could reasonably be included in a set them. Art from the same artists, depicts the same person, or clearly depict a specific plane they are on is a plus. Cards featuring a walker or plane known to have a connection to the infinite Consortium are likely to have an edge, but hey "Infinite" so if it's wild but awesome go ahead and submit it.

There will be a 1st through 3rd place, as well as at least one honorable mention.

There has been some discussion of interesting new prizes here:

Adopted - as per the Story of Noh. A card I find so completely appropriate I may just "take home". It goes into my headcanon will be placed in one of my galleries. I'll comment with a link on your card.

Gallery: I'll be putting together an "Infinite Consortium" set for all cards I consider reasonable additions.

This contest will run until the 17th of May, then it will close for judging.

If the response is good I have ideas for follow up contests, so if you like this contest keep an eye out. Have fun with the hammer & tongs fellow smiths.