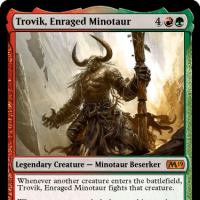 dragonbornletter
December 2019 in Just for Fun Contests
Legendary Creatures. Everyone loves them, especially if you play a lot
of Commander.

Now combine the two together. How many Legendary Walls has
wizards of the coast made? Precisely 1!!!!!
https://www.exclusivelygames.com/magic-the-gathering-introduces-the-first-legendary-wall/

So, after finding this out, I obviously needed to make a Contest about it.