KrampisZman
February 2018 edited February 2018 in Contests and Challenges
The time has come once again to answer life's most magical question: Who's smithing reigns supreme. This is Iron Smith!

A delectable Japanese tradition has taken root on MTGcardsmith community forums soil. We have been graced with the establishment of our very own Smithing Stadium, where our nimble chairman has brought together the most pungent card designs of both east and west. It is here, where the best of the best from around the world meet and face the ultimate card design challenge. 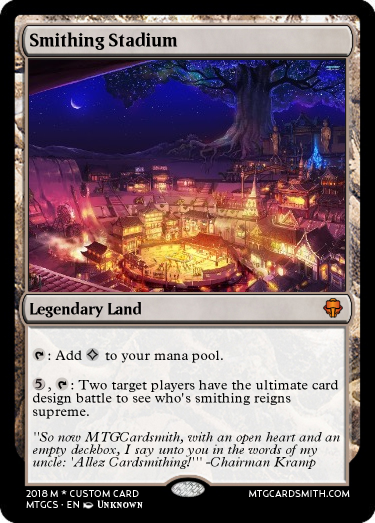 So please allow me to introduce a veritable pantheon of cardsmithing giants, your very own Iron smiths MTGCardsmith community forums!

In mere moments, Iron Smith @modnation675 will be pitted against our challenger, who thirsts to discover our secret ingredient, and enter the heat of battle here in smithing stadium.

Well known for being an aspiring author/actor/whatever they can do, honestly, @Lujikul is sure to be a major force in smithing stadium today.

I want to see your designs based upon the theme of cooking or food. As this was an Iron Chef-inspired contest, I thought it would be a fitting way to kick off the games. You can make a chef, a magical dish, kitchen utensil, or something along those lines.

So now MTGCardsmith, with an open heart and an empty deckbox, I say unto you in the words of my uncle: 'Allez Cardsmithing!'