HeroKP
July 2019 in Custom Card Sets
DISCLAIMER: This is more of a personal work showcase than anything else, but if you guys want to help me with this, I'd be thrilled.

DISCLAIMER #2: Most of these cards are hella OP, I think, so I would love to hear any feedback the community can give.

Convergence of the twenty worlds, and what the hell is up with that cycle I made

In a remote corner of the multiverse, lay twenty worlds, in equilibrium. However, that equilibrium is thin at best, and ephemeral at worst. For these worlds were created by mad and authoritarian gods (who were kinda OCD), and as such come built with an inescapable, age-long cycle (like the aurora of Lorwynn/Shadowmoor), that tilts them all in one direction to converge (roll credits) in one point in space once the planes diverge from the path of perfection and bliss laid out for them by the gods. Once the status quo is disrupted, this causes a chain reaction in the other 19 worlds (as they are all connected), and the Convergence is triggered. The greatest mages of each of these realms are slid into the convergent point, and battle begins. The champions fight to the death, and as each one dies their world gets Thanos snapped, but not in half, completely, and a new one springs into its place. Only the last survivor gets to have their world not be destroyed.

In the last convergence, the one world that didn't die was Tureon, an all-encompassing dark forest (like those on Innistrad or Shadowmoor), that still manages to foster life that not only survives, but thrives in the mystical shadows. The world's saviour was a man called Beldur, an aged neromancer that could shift souls between life and death. And, surprisingly, after two thousand years, he is still alive (sorta), kicking (if ghosts can kick), and considered by the god's algorithm to be the greatest sorcerer of the plane. As such, he shall fight in his second battle of the convergence, to see if Tureon shall last two thousand more years.

Though Tureon is still very much the same as it was, all the other worlds have now turned over into new incarnations. And those incarnations have new champions. Let's explore those, shall we? (DISCLAIMER No. 2: Buckle up, there are a lot of them!) 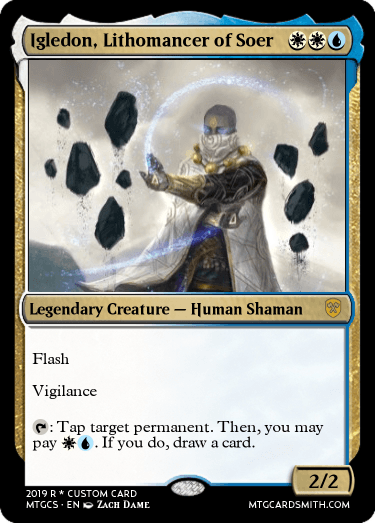 So, lithomancers have traditionally been associated with white and red, but why not white and blue? I think stone can represent incapacitation really well on a spiritual level, so Igledon and his cards will be about denying the opponents resources (making lands and creatures tap, denying card draw, that sort of thing). 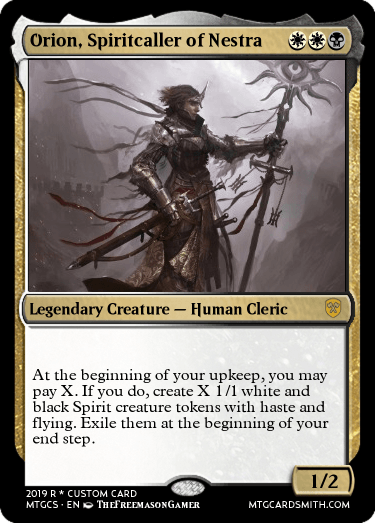 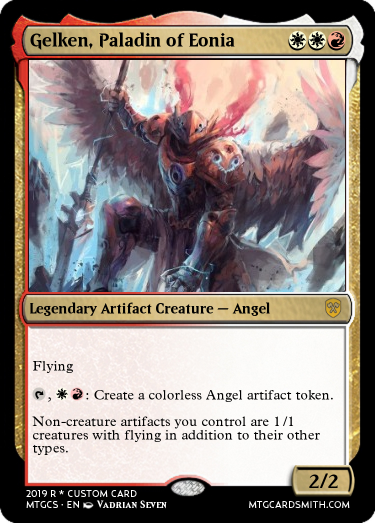 Though both white and and red have plenty of artifacts, Boros seems lacking in that regard, so that's a theme. I also would like to explore this idea of alternate opalescences for artifacts, and this seems a good way to do that. 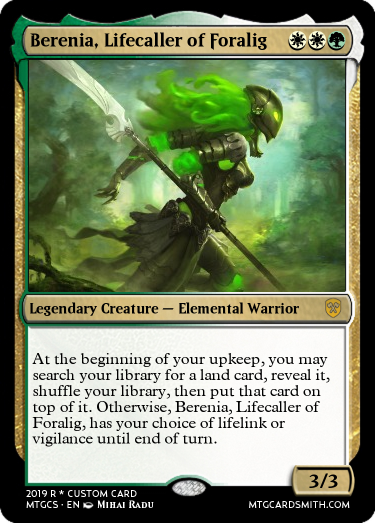 Choice is a theme I was always fascinated with in Magic, and I like adaptable cards. So far, this has mostly appeared in black and blue, but why not white and green? After all, what is life if not a collection of choices? 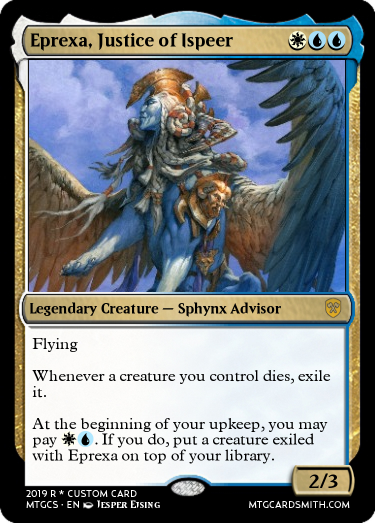 Eprexa believes that everyone should have a second chance, and that includes chances at life. Cards that support her will have many recycling effects as well as the more traditional Azorius-affiliated blinks. 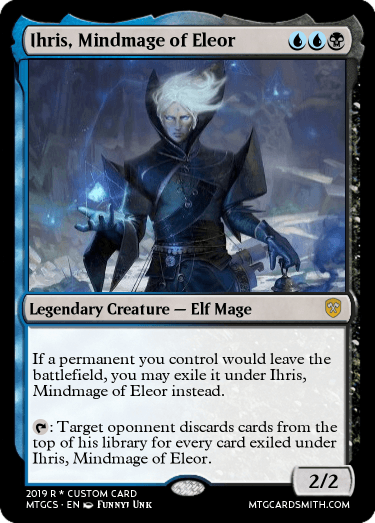 That aside, I also would like to explore the theme of absorbation. Exiling cards under other cards is a really neat mechanic, and Ihris will be the way to explore that.

More efficient TÖKEN machines. Creating many of them is a red ability, bu we will also use blue to exploit them using number of creature effects. 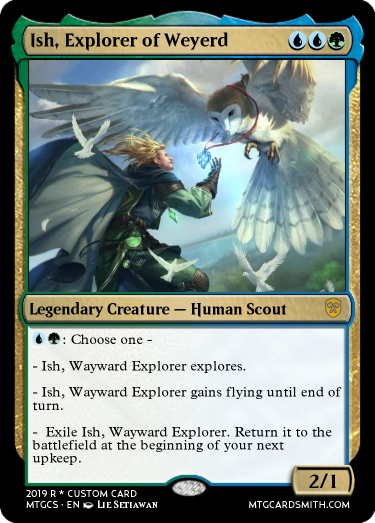 Bringing some green fun into the blue scientific method, Ish'll have adaptable creatures with the explore mechanic, but keep that trademark blue sneakiness and reconnaisance tactics. 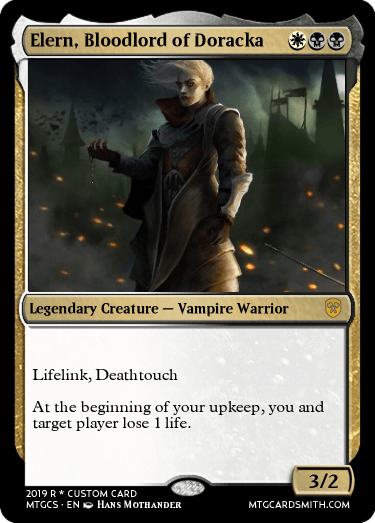 Self-hurt for a greater gain is very BLAAAAAACKKKXXXXX, but I intend to make it more orderly with white splash. Elern is intended for long games where she and her cards can slowly chip away at life totals. 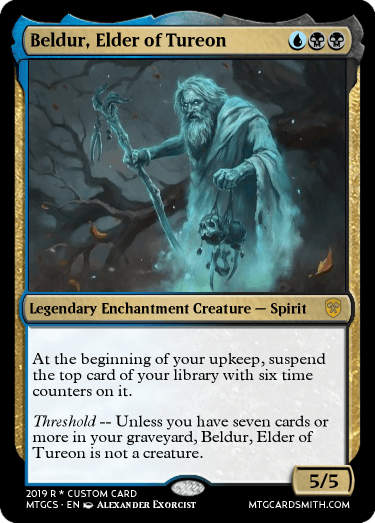 Enchantment creature un-creatuning and threshold go great together, in my opinion, so Beldur will pioneer an army of cards that get better as the game progresses, as well as fetching spells of glorious black randomness using my patented alternate suspense methods.