zizick123
September 15 edited September 15 in Contests and Challenges
Hello Friends. Its been awhile sense I have opened a contest!

Awhile ago, I saw a contest for making star wars cards, and I really liked a lot of the entries. I thought it would be awesome to see more, and this time I wanted to see it split up into the Era's: Prequel Trilogy, Original Trilogy, and Sequel Trilogy. Opinions on each trilogy set aside

, I wanted to see what mechanics and flavors we could make for each one!

Starting off, let's begin with the first chronological trilogy: the prequels. Specifically, events and characters from Episodes I: Phantom Menace, Episode II: Attack of the Clones, and Episode III: Revenge of the Sith. If you feel inclined, you can also add cards from the Clone Wars animated series if you want, although the main focus should be on the movies.

Although I haven't put a ton of thought into it, I have come up with loose Ideas for card mechanics and styles in these sets.
When it comes to the darkside, I like the Idea of the focus being on Loosing life, and dealing damage.

The specific mechanic I have created is Darkside:

Darkside (cost)
(If you lost 5 or more life this turn or cards you control have dealt five or more damage this turn, you may cast this card from your hand or the graveyard for it's darkside cost. If you cast it from the graveyard this way, Exile it.)

I hope to see a lot of interactions when casting something for it's dark side cost.
Here are some examples of this with some of my own cards: 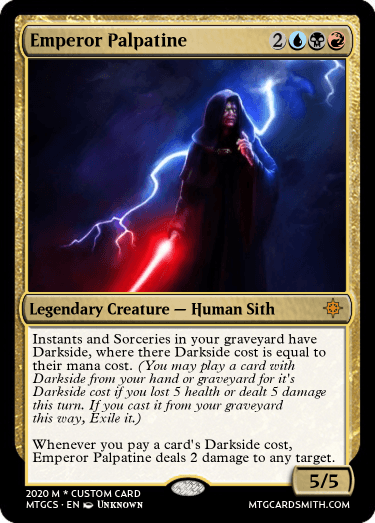 The lightside I have no specific mechanic for but I would like to be around something like drawing cards, +1/+1 counters, or gaining life. I also think it would be cool to see the use of the Mentor! If you create your own Mechanic and I like it, I will add it to the list and and you get 5 favorites!

When this creature enters the battlefield, place a bounty counter on up to (number) creatures.

I thought it would be awesome to see the use of this with bounty hunters! Interations could include when a creature with a bounty counter leaves the battlefield, something happens. Use your creativity to create interesting effects!

Here is an example I have made: 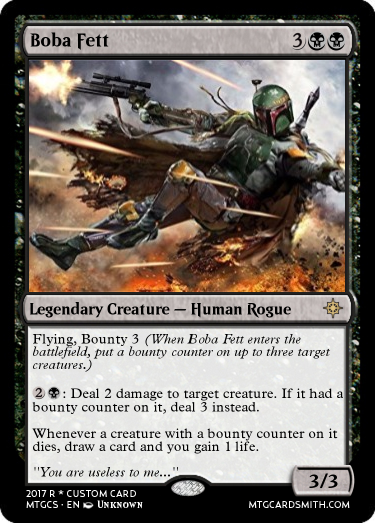 I also thought it would be cool to see a mechanic involving droids! If you create one I like, I'll add it here and you'll get five favorites!

More Examples of my cards: https://mtgcardsmith.com/account/sets/25348

- Up too three Rare/Mythic Rare Entries
- No limit on Commons/Uncommons
- Avoid posting cards that have already been created in this set: https://mtgcardsmith.com/account/sets/25348
- Only characters or events in the Prequel Trilogy and Clone Wars animated series
- Use Rivals of Ixalan Set Art

Judge Date is to be announced.

Good Luck and Have Fun!