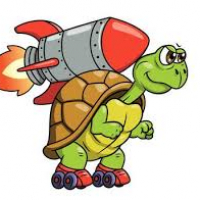 TheRacingTurtle
January 2021 edited January 2021 in Contests and Challenges
Hi Cardsmiths!
First time starting up a discussion here, so I appreciate your patience and understanding with any mistakes I might make. I have been thoroughly enjoying taking on the creative challenges around here, so thought I would put one forward myself.

Create-a-Cult!
"A cult is a social group that is defined by its unusual religious, spiritual, or philosophical beliefs, or by its common interest in a particular personality, object, or goal."

The challenge I put to you is to develop a series of cards to represent a cult (as defined above) over the next four weeks. Each week I shall provide two prompts to design cards for, representing different aspects of your cult. This might be the cult's leader, it's holy relic, or it's otherworldly deity. You'll also be invited to create up to three additional cards to support that week's prompts, to flesh out the story and mechanics behind them. In addition to the two prompts, I will also be offering a number of bonus challenges to work towards amongst all the cards you design.

So that's a minimum of 2 cards, a maximum of five, per week.

At the end of each week I shall award points to each participant.
- I will judge the week's entries and award 7 points to the smith I determine has made the best cards for the prompt. 5 points will go to a second place, and 3 points to third. Entries will be judged for how well they meet the prompts, how well they mesh within the overall design of your cult as you establish it, and how well the card is designed from a mechanical stand point (are rules correct, understandable, does it make sense as a Magic card etc.)
- Then for each bonus challenge each participant has achieved among their designs, they earn a point.

Less tangibly, there will also be a fortune in glory and renown on the line.

Joining late? No worries. If you design cards for the previous weeks I will still award you bonus points for the various challenges you complete, you just won't be in each week's running to win the 7/5/3 points. You'll still need to meet each week's core prompts as well.

Other Rules:
-Only accepting new cards created for this challenge, however pre-existing mechanics are welcome.
-Please post an image of each card you create in the discussion, with a link to it's MTG Cardsmith page.
-You have all week to enter your cards, you do not need to enter them all at once.
-Edits are allowed, but once I go over each entry at the end of the week and award points I shall not come back and review previous entries.

Best of luck to you all, and I hope you enjoy. Part 1 is about to be posted.

See at the bottom of Week 1 for a detailed explanation of the prompts and bonus challenges.
«1234567»