Demons, devils, and imps! Oh my!

I have always had a unique fascination with the more sinister creatures in Magic: the gathering and would like to see what you guys can come up with!

2. four entries by the deadline for each participant (one for each type of card), no old entries for fairness.

3. This is the most important rule I expect out of all participants...HAVE FUN!

1. Balanced: Not OP, not underwhelming.

2. Creativity: Not an already existing card, or a card very similar to one.

3. Polished: Make it feel complete and thought out.

4. Art choice: Art is a must, and try to make it decent. No inappropriate images and credit the artist.

As of now, the deadline is the 7th of October.


here's a little card I did for fun
https://mtgcardsmith.com/view/bane-cleaver-demon 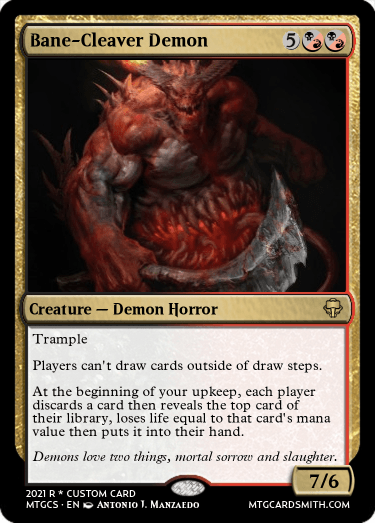