Put A Counter On That 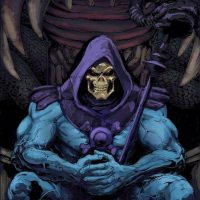 sorinjace
March 5 edited March 5 in Contests and Challenges
I want to say first and foremost thank you to everyone that had participated in my Halloween contest last year. That was an awesome contest. There was phenomenal entries and I am thankful to Corwinnn and Suicidal Deity for helping finish the contest up for me while I had some real life traumas and tragedies going on. It's really been a hard last 10 months. I will spare you guys the gruesome details. I will say though that it was nothing I would ever wish to see anyone else ever go through. That said, again, thank you to those of you that haven't forgotten about me. This is why this community kicks so much butt. 🤘☺️

That said, here is my pitch for this contest!

I'd like to see you guys come up with permanent cards that require some type of a counter to be put on it or it puts a counter onto something else (it can be anything unheard of or something like a suspend card, just as an example).

Yes, it's that simple. Let your imagination fly.

Rules:
1.) Permanent cards only. They can create tokens, as long as the card itself is a permanent too.
2.) The card has to create counters of some type. It can be any amount or any type of counters.
3.) Please use nonMTG art and credit the artist if possible.
4.) No limit on how many entries.
5.) Contest ends the end of the day on May 1st 2022. I'm giving it ample amount of time to make sure I can get back to judging this contest in due time. Again, thank you to Corwinnn for helping me with my last contest. Anyone who knows me knows the Halloween contests and the cards of mtgcardsmith contests are my favorites, so you know I was definitely going through things out here if I couldn't finish the contest and judge it in a timely manner for you guys. Thank you again, guys. Can't say it enough.

That is it! I hope you guys have fun with this contest, and good luck!