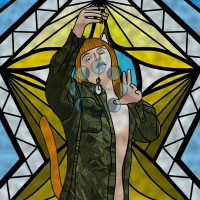 Knowledge of Colonizers lore is not necessary for this bit, but if you're new, feel free to skip as it may cause confusion

After many long days spent with the Kala-Niza, the Hero of Capes was free at last. The demons had been entertained with the latest competition, an excellently well rounded display of, well, everything! However, by letting them go, they weren't done just yet... merely looking for someone to put their own spin on things. To open these demons to a whole new host of thrills they would hope they haven't seen before.

As the Hero was dismissed from their chamber, the demons summoned their scribes and their collectors... it was time to search for another which had been indebted to them. Another powerful being they could exploit... someone else who could manipulate the very planes themselves. Which is when they found a desperate soul on Stitia. A god that had made a deal with them in the past for vengeance. A little extra grit never hurt anyone, now did it? Besides... it's not like he had anything better to do!


As the chamber door opened, a somewhat cloaked, oriental figure stumbled into the door. A spirit of vengeance given tangible form. Another walking legend, though perhaps not as significant, that could give them what they were looking for. War. Chaos. Carnage... but in controlled doses. They didn't want the fun to be spoiled straightaway...

The spirit shook his head as he stood and wiped the dust and demonic muck from a recent revel from his garb, then stood to see the demons. He scoffed. "From bloody battle and horrid loss, a world most profane, you call me. Why?"
"We were looking through our debts when we noticed that you had amassed... a rather large sum," one of them replies. "Your debt is... oh dear... we can't even sell this to anyone! Altering the fate of several worlds, binding several entities comparable in power to yourself, and even creating-... why haven't we called this in already?!" The demon spoke to a few others in private before sighing, displeased. "Now, normally we would just kill you outright for this kind of outstanding debt, but we're willing to make you a new offer..."


Today, something that has never been done before is happening right before your eyes. From the shadows steps forth a new bearer of @HeroKP's Colonizers tradition. Otaimo, Interplanar God of Vengeance and Punishment, joined by @DrakeGladis
and @AxNoodle! With Otaimo's power to bind creatures, places, and even whole kingdoms to planes, both the worthy and the wicked have been brought upon Myria, and whether it's their test or their punishment, they have three goals; survive, grow, and prosper...